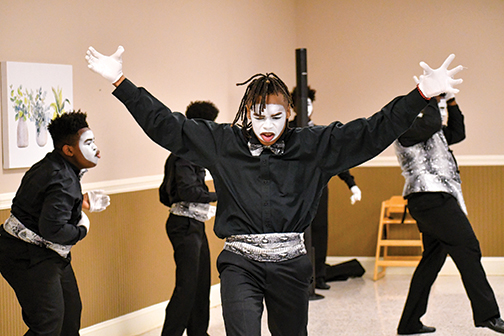 The Gospel Warriors performed a powerful dance during the dinner.

The program featured a special dance from Houseparent Dequan Gomillion with a few of his cottage kids, an interpretive dance by Connie Maxwell student April, soloists Mona Lei and Stephanie Jackson, and a keynote address by Clevonne Robinson.

Afterward, students and staff made their way to the dining hall to enjoy a soul food dinner and a powerful dance presentation by the Gospel Warriors.

Throughout her talk, Robinson referenced the movie Hidden Figures, a 2016 American biographical drama film about black female mathematicians who worked at the National Aeronautics and Space Administration (NASA) during the space race.

Robinson reminded everyone that often we don’t know the real story behind people’s lives. She went on to talk about her struggles of being raised in a home with domestic violence. As a young person, she felt cursed but eventually made the decision to fight for her future as a black female.

Robinson continued, “I see resilience in you. I say you should pursue your calling with pride. Enter it with integrity, honor it with humility, and cherish it like it’s your last. Insist that your voice be heard, you matter, and I believe in you. Don’t wait to be inspired; be an inspiration. You have all the tools you need to be what you want to be. Be a hidden figure, look back at black history month as a time to remember all those people that were forgotten. All those people that made a mark on your life and in our society. It is a big heart and motivation that is going to take you where you need to be.” 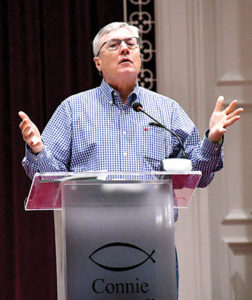 Former Pastor of Connie Maxwell Baptist Church Rev. Doug Kauffmann ended the service with a few remarks and a prayer.
“African Americans have taught us what it means to be Christ because they have loved back, and they have given to this country their lives, their sweat, their blood, and their inspiration,” Kauffmann said.

He concluded, “Black History Month to me is celebrating that the first shall be last, the last will be first, and thanking African Americans for showing us Christ, for having the spirit of forgiveness and love, that they weren’t shown so often.”