Connie Maxwell Alum Has Ties to Key Moments in US History

Danny Brooks was adopted the week before his 13th birthday. He had lived at Connie Maxwell since the age of five, when he arrived at the Eastern Star Cottage wearing simple overalls, no shoes, and with no other belongings. He fondly recalls Dr. Sam Smith’s gentle and loving spirit and Ms. Davis, a matron who cared for the 16 boys who lived in her cottage. He’d never seen or been inside a church before attending the worship services at Connie Maxwell Baptist Church.

“I have good memories of Connie Maxwell. It’s where I learned to go to church and where my work ethic and organizational skills were taught to me. I learned all the life lessons that parents teach their children to help them be ready for the outside world. If it hadn’t been for Connie Maxwell, there is no telling what would have happened to me,” he says.

Those life skills and lessons were introduced through daily chores and working in the field and dairy. For Christmas one year, he asked for a wagon “to pull down the sidewalk to be able to carry the groceries back from the Commissary. I used my brain!” Other happy memories include his love of water, such as swimming in a nearby pond and becoming the first lifeguard at the newly installed Connie Maxwell pool at the age of 12. 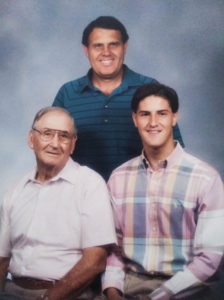 From the left: Rick’s adopted father the late S.W. Rivers, Rick, and his son, Dan

Quite simply, Connie Maxwell was his home and its people, his family. So, when a loving couple from West Columbia arrived to adopt Danny and his little sister, he remembers hiding from them because he didn’t want to leave. His new family gave him a new name, and, at that moment in July 1958, Rick Rivers’ new life began.

“My adopted father was one of 11 children. I never had parents or the love that parents give you, and it was a shock to immediately have so many cousins, aunts, and uncles. They all accepted me. Not one of them ever asked me anything [about my story] until I was ready to share. They accepted me as one of their own. I couldn’t have asked for a better Christian family to adopt me,” Rick recalls.

The years ahead would hold surprising twists and turns, with most traced back to Rick’s decision to join the Navy Reserves as a student at Brookland-Cayce High School. Boot camp followed graduation, and 17-year-old Rick soon found himself aboard a Navy destroyer headed to the Bay of Pigs during the Cuban Missile Crisis. For two weeks, his crew waited for orders to strike using plans sent by President Kennedy. Rick admits, “it didn’t register until years later the scope and depth of that time.”

Rick had completed underwater demolition training by the time he was 19 years old and became a member of Seal Teams Three and Four. These elite teams were charged with dangerous missions, including having their boat hit by mortar fire and retrieving a three-story bomb from underwater. In December 1965, Rick completed two weeks of training to retrieve Nasa’s Gemini VI and VII mission space crafts upon their return to earth. His team was assigned to Gemini VII, manned by Frank Borman and Jim Lovell, who had spent 14 days in space

“I saw three parachutes coming down, and we met them after they hit the water. We put a flotation around the capsule to keep it from sinking. It was cold and rough that day in the Atlantic, and six-foot waves made them bob like a cork. The capsule door was welded shut from reentry, so the astronauts had to blow the hatch off from the inside. We hooked a cable from a helicopter to the capsule to prevent it from sinking. They were seasick after bobbing in the ocean but couldn’t remove their helmets because they had to decontaminate first,” Rick recalls of the historic moment. 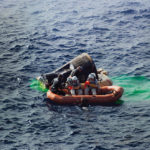 One photo exists of Rick helping Borman and Lovell emerge from the capsule, something he saw only years later as photos were not taken during most Seal Team missions. Rick says the next season of his life was darker and filled with experiences too raw to share, even today. From 1966-67 Rick served 30 combat missions in Vietnam.

“I turned 21 three months before I was discharged from the military. I couldn’t vote or buy beer, even if I’d wanted to, but I could fight for my country. Yet I’d do it again if I was called and able,” he says, humbly mentioning having been awarded the Bronze Star Medal for bravery in action.

Rick returned to build a life outside of his military service alongside his wife Jean in Lexington, South Carolina. Following a 29-year career with Delta, Rick enrolled in the police academy and served as a deputy sheriff for Richland County for ten years. He continued serving in the community as a bus driver and in a maintenance role at a local elementary school. Rick and Jean have two adult children, four grandchildren, two great-grandchildren, and count a young “adopted” neighbor family as their own – a capacity to love that Rick credits having learned from his roots at Connie Maxwell. 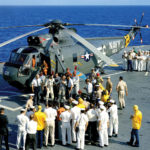 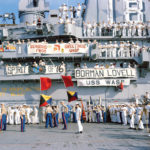 Rick’s support of Connie Maxwell has included monthly donations for the last 25 years, participating in a Midlands alumni group that has maintained special relationships and accomplished critical campus projects together and through service as a trustee and alumni board member. He is also a vocal supporter in the community when given a chance, including sharing his military experiences.

“I credit Connie Maxwell with my character today,” Rick says.