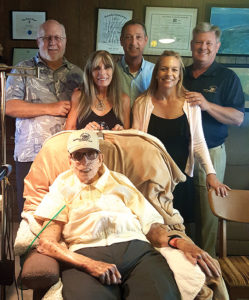 Virgil Rochester arrived at Connie Maxwell Children’s Home in August 1938, just shy of his twelfth birthday. The youngest of 10 children had lost both parents by the age of six and had lived with various family members. When he arrived at Greenwood Cottage Number One, his new life began.

“I loved Connie Maxwell, and Ms. Josie Harden was the best house mother. The greatest days of my life were spent there,” says Virgil, now 93-years-old and living in California.

President William D. “Danny” Nicholson II and Vice President for Advancement Eric Taylor visited with Virgil and some of his family members at his home in the summer of 2018. Reminiscing about his years in Greenwood, Virgil shared vivid memories including arriving to work every morning at 4 a.m. to the Connie Maxwell dairy.

“He said that milking cows early in the morning as a child taught him a principle that followed his whole life – ‘you had to take care of the cows twice as much as the time it took to milk them.’

Throughout his successful life, he took more time for preparation than most people and that one principle contributed to his success,” Nicholson says.

After Virgil graduated from Connie Maxwell in 1942, he went to Furman College. At the end of his freshman year, he enlisted in the Navy and served overseas during World War II. His insatiable work ethic led him to keep several jobs while in school, including the midnight shift at the Dunean Mills. In 1946 Virgil married Annie Laurie Foster, and two years later he enrolled in law school at the University of South Carolina. The couple went on to have four children and moved many times throughout the United States and abroad during his 30-year military career. Virgil’s service also included the reserves and the United States Air Force, as well as both the Korean and Vietnam Wars.

During his 30-year military career, Virgil continued to have exciting opportunities. Through his private law practice, he became a law partner with attorney John D. Long who went on to serve as a United States Senator. He was also involved with the space program from its infancy, having opportunities to see all the early astronauts and Apollo moon shots.

“Virgil is one of the most successful alumni we have. He negotiated defense contracts for Apollo 12 and worked with legal legend J.D. Long in Washington, D.C. His experience is incredible,” says Nicholson.

In retirement, Virgil embraced a new career in avocado farming. After purchasing land in California in the mid-1960s, the family planted the grove by hand in 1977. Today, Virgil and his family continue to harvest avocados at their Turtle Rock Ranch, although he physically stopped picking the fruit at age 76. His family recognizes Connie Maxwell’s impact on many aspects of their lives, including the avocado business.

“Connie Maxwell was the impetus of my father’s entire adult future. The role it played in our family is immeasurable. Connie Maxwell taught the lessons of hard work, humility, love of self and of God, and my father passed on those same lessons to us,” says Vaquera.

“Our visit made clear that the number one priority in Virgil’s life was his family, and that love was prominent throughout the entire family. I couldn’t help but think of the influence Connie Maxwell had on that aspect of his life, the one thing he didn’t have growing up,” says Taylor.

Connie Maxwell has remained a part of Virgil’s life as he brought his family there for visits over the years, including his most recent for a 1990 reunion. He is also an ongoing supporter of his childhood “home.” One of the main reasons Taylor and Nicholson visited Virgil was to thank him for his support, but the experience impacted Taylor in other profound ways.

“The first thing Virgil said was that Connie Maxwell was the best place in the whole world and that it shaped everything about him. He talked about his spiritual life, being taught the value of an education and a work ethic. He also said Connie Maxwell taught him to learn to love himself and others. That’s significant because so many children come to Connie Maxwell having never really seen what love looks like because they haven’t experienced it themselves,” says Taylor.

According to Nicholson, Virgil’s life story should be told to encourage others. “There are so many children that are broken, abused, or have nowhere to go, and when they get to hear about people who have made such an impact in our world, it gives them hope,” he says.

For his part, Virgil continues to love Connie Maxwell and the lifelong friendships he made there. “The best four years of my life were spent at Connie Maxwell. To me, it feels like home,” he says.