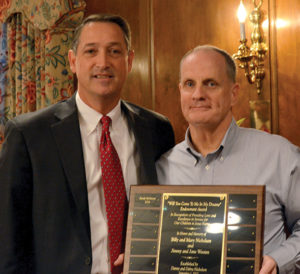 Early on, President Danny Nicholson knew he wanted to honor staff members at Connie Maxwell that went above and beyond the call of duty. He also knew he would never forget the little boy’s words that lead him and his wife Debra to their current calling.

This past summer they announced the Will you Come to me in my Dreams Award.

“We wanted to mark the little boy’s leading of our lives and calling, as well as honor our parents through this award,” Danny said.

Nominations were submitted by Sept. 30, 2018, and reviewed by a panel of three trustees, a Connie Maxwell alumnus, and a retired staff member.

In order to qualify, nominees had to meet certain criteria including: they must be a full-time employee with at least 5 years of service; demonstrate forgiveness to others; make it a priority to live a Godly example and make disciples; serve with excellence and unconditional love; develop and nurture relationships with outside partner individuals and churches; be involved in campus activities beyond daily responsibilities; and be a team player.

During the November 2018 board meeting, Greenwood Campus Administrator Randy McManus was presented as the first recipient of this annual award.

“It thrills my heart that Randy will be the first one to honor my mom and dad and Debra’s parents, and be recognized as an example of sacrifice, caring, loving, and giving yourself to people in Jesus’ name,” Danny said.

Randy’s nomination letter described him as a man that often uses words of encouragement and promotes unity and teamwork. In addition, he was described as someone who is always first to volunteer and put in extra hours when needed. Randy often attends summer camp with the children so that he can have more intentional discipleship time with them.

“When you have a good coach, you can be a good athlete,” Randy said after accepting his award. “Danny is a great coach, a hard worker, and a great example. I have a hard time disappointing him, so I appreciate that.”

In addition to a monetary award paid for by an endowment that was established by the Nicholsons, a plaque and photo will hang outside the President’s office all year to celebrate Randy’s sacrifice to Connie Maxwell.