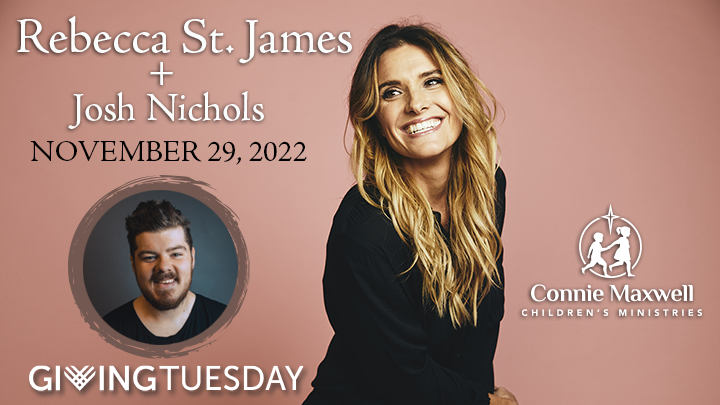 Join us on #GivingTuesday, Nov. 29, 2022, for a special concert featuring  GRAMMY®-winning singer/songwriter, best-selling author, speaker, and actress Rebecca St. James! Join the Australian native for an intimate solo performance that will feature a combination of original music, worship, and Christmas songs.

St. James has earned multiple Dove Awards, nine #1 Christian radio singles, and two GOLD®-certified recordings, and her discography includes such iconic albums as Pray, God and Transform. Author of the best-selling titles Wait For Me (Thomas Nelson) and Pure (Hachette/Faithwords), among others, she starred in the 2009 film Sarah’s Choice; portrayed Mary Magdalene in the groundbreaking rock opera Hero; and voiced ‘Hope, The Angel’ in VeggieTales’ best-selling The Easter Carol, in addition to other diverse roles.

Following a hiatus from recording and touring—during which time she married and started a family—St. James returned to the stage in 2018 to perform with her brothers, multi-GRAMMY® and Dove Award-winning duo for KING & COUNTRY, and co-wrote several selections on their blockbuster 2019 recording, Burn the Ships.

The concert will begin at 6:15 pm with a bonus performance from Josh Nichols. A Gadsden, Alabama native, Josh, is an accomplished singer songwriter based in Nashville, Tennessee. With a career spanning over ten years in the music industry, and drawing inspiration from artists such as Lewis Capaldi, Allen Stone, and JP Saxe, Josh has developed a unique space for himself in the pop/soul genre. His debut album is scheduled for release later this year.

You don’t want to miss this wonderful evening of music and worship. Any donations above the ticket price will support our #GivingTuesday goal and ultimately help the children and families we serve. Tickets are only $20 per person. Come be a part of the fun!

Seating on a first-come, first-served basis. Doors open at 5:15 pm. For questions, please contact Julie Miner at 864-942-1429 or jminer@conniemaxwell.com.